I’m originally from the Mid-West, and my grandmother had this saying she used when the grandkids did something they should not have: “You don’t believe that fat meat is greasy”.

Now for those of you that didn’t have a grandmother like mine, let me put that in simpler terms.

It means “You are going to learn the hard way”.

All over this country, the African American vote is taken for granted.

African Americans have been SO loyal to Democrats that we are now no longer a part of the conversation when it comes to elections.

Not by Republicans, and not by Democrats

It has been pointed out many times that the use of African American political consulting firms by Democrats running for office is minimal, compared to others.

It has been noted that the use of Black Media in campaigns is minimal, compared to others.

It has been noted that most politicians show up into the African American communities two weeks before a general election with back packs and a fish fry, and think their work is done.

I was reading an article about Hillary Clinton’s run for The White House and her desire to win Florida.

The article discussed how the Hispanic vote is up for grabs, given Jeb Bush’s and Marco Rubio’s ties to Florida.

The article also discussed Hillary’s need to go outside South Florida, which is Democrat country, to try to win “White working-class women”.

Read the article for yourself here.

This is where my Grandmother’s saying comes into play.

If Hillary Clinton doesn’t believe that fat meat is greasy, she is going to learn the hard way.

There wasn’t one mention of African Americans in that article.

Not courting the African American vote has become the rule by both Republicans and Democrats.

Now I would very much like to organize “Sisters For Hillary”, but right now, I’m not so sure that we are.

My good friend Tezlyn Figaro, once a Democrat, but now an Independent, says she has had enough of being ignored by both parties. She is doing something about it, like starting the BlackOut2016 campaign.  She is also fighting for the rights of those who have been wronged, like Monroe Bird III, shot and paralyzed by an over-zealous security guard in Tulsa, Oklahoma.

Tezlyn has teamed up with famed attorney Benjamin Crump on this matter.

When you look at the number of African Americans that turned out for President Obama, which was off the charts,  the largest percentage of that number was women.

We are being killed in the streets, more often than not without recourse.

Victor White, who the coroner says, shot himself in the back while handcuffed. Harry Houdini would be proud of that performance, wouldn’t you say?

I could go on and on, because there are many more, but why. I’m sure you get the picture.

Unemployment rates in the African American communities are still ridiculous. Our schools are sub-standard.

All of this begs the question of why do African Americans give their votes away to people who clearly give less than a damn about us.

It is a fair question.

Because I’m not one to run from a fight, and because I truly believe in the principles of the Democratic Party, I’ve decided to remain a Democrat.

I have founded the Democratic African American Women Caucus, because our needs aren’t being met, or our voices heard, by the traditional Democratic Party.

Despite intense opposition from the dysfunctional Florida Democratic Party, and it’s leaders Allison Tant and Scott Arceneaux, the DAAWC is growing like wildfire.

We are having a Candidate/Leadership training event April 25, in Ft. Lauderdale.

Black Women are standing up for our sons, our daughters, ourselves, and our votes. 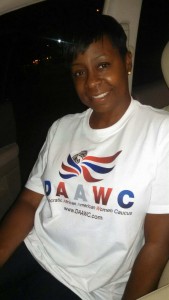 Now I know that I said I am a Democrat because I believe in party principles, but that does not mean that I’m adverse to showing Democratic Candidates that take the African American vote for granted, that fat meat is greasy.

The hashtag #BlackLivesMatter has become the rallying cry for our community.

Candidates, to include Hillary Clinton,  can learn that fact the easy way, or the hard way.

The choice will be up to them.