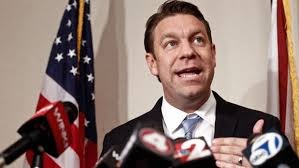 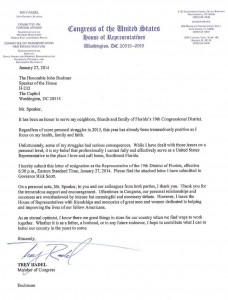 Trey Radel of Florida, who pleaded guilty to cocaine possession in November, resigns from Congress.

Good.  He needed to go.  I’m only wondering what took him so long to do it!

Radel’s decision to step down was confirmed by his chief of staff, Dave Natonski.

Radel, a freshman who represents a Fort Myers-based district, returned to work in Washington earlier this month after taking a leave of absence to undergo treatment at a rehab facility. He had vowed to stay in office after pleading guilty to a misdemeanor charge of cocaine possession, even though a majority of the people he represented wanted him out.

Radel, 37, pleaded guilty Nov. 20 in District of Columbia Superior Court and was sentenced to supervised probation for one year, ordered to undergo substance abuse treatment and fined $250. He was caught buying 3.5 grams of cocaine on Oct. 29 from an undercover police officer. He is very lucky this happened in Washington, DC.  Florida Laws would not have been so kind to him.

A former radio talk show host and TV journalist, Radel had resisted calls from Florida Gov. Rick Scott and other Republicans to step aside.  I wonder what happened to convince Radel to finally resign.  Clearly it was something, or he would have done the right thing initally. When Radel returned to work earlier this month for the new legislative session, he began making amends with his colleagues and apologized to them personally for his actions. I’m sure some of those colleagues did blow with him…..

“This is something I will continue to work on the rest of my life,” he told reporters at the time. “I will take it one day at a time and, in doing so, I hope to rebuild and regain trust.”

While a lot of people have demons they have to deal with, dealing with them should not take place while making laws on Capitol Hill.  Get your life together Trey Radel, but not while in office!!