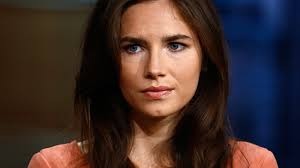 An Italian Court has found Amanda Knox guilty  of the murder of  Meredith Kercher. That is all well and good, but Amanda Knox is here in The United States, and she says the Italians will have to drag her kicking and screaming back to Italy. I don’t blame her. Who in their right mind would go serve a 28 1/2 year sentence for something that a. They claim they didn’t do and b. In a country other than the one they are a citizen of or is present in.

Whether or not she will be extradited is a different story altogether. The victim’s family, of course, thinks Knox should be extradited and made to serve her sentence. This story has been quite interesting, to say the least.

I don’t know whether she and her boyfriend,  Raffaele Sollecito, who was also convicted, are guilty or not. What I do know, however, is that unless the United States willingly turns Knox over, she will not serve anymore time.

Knox says she will fight til the end to prove her innocence, just from THIS side of the pond! I’m not mad a ya Amanda!

Something tells me this story isn’t over, and could turn very political VERY soon!