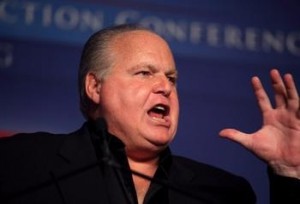 Question: How do you destroy the Working Class?

Answer: You get them to pay for their own death.

More to the point, you manufacture rage. Make the rage so blinding that they can’t see anything other than the rage YOU manufacture.

Sound pretty simple? Good, because it is.

If you tell certain people that the Poor, The Unemployed, Liberals, and lastly, that Black Man in The White House, more appropriately known as President Barack Obama, are destroying America, certain people will send you their very last dime!!!

That has become a Republican Party cudgel to use as an anti-Hillary weapon in 2016.  The majority of  Americans now realize that Benghazi was a tragic situation, but that it has now become part of The Manufactured Rage of the Right.

Rush Limbaugh, who craftily collects all his millions based on manufactured rage, is the master. He knows he can send certain groups into such a tizzy, that it will keep the cash coming his way for a long time to come. Politicians use manufactured rage to fund raise. Ted Cruz picked up a pretty penny shutting down the government, where the working class suffered immensely.

What they don’t realize, however, is that what must be because one needs it to be, is hardly a worthy or reliable determinant of fact.

Some of these people become rabid with this rage. I am always coming under fire from fringe groups on twitter regarding the President and the whole “Obama is destroying America, wake up white people” rhetoric. It happened again last night! The hilarious part of last night’s attack on me is that these people really thought they were “teaching me a thing or two”.  Follow me on twitter to enjoy the show: @womenonthemove1.

They clearly don’t know me very well. I was sipping a glass of wine with some friends and occasionally laughing because I could figuratively see the foam coming out of their mouths.

These people are really pissed!

According to Dr. Michael Kimmel, a professor of Sociology at Stony Brook University: “white men are the beneficiaries of the greatest affirmative action program in world history. It is called “world history”. White men so stacked the deck that everyone else was pretty much excluded from playing at all. When those others did begin to play, the field was so uneven that white men got a massive head start, and everyone else had to play with massive handicaps. Maybe actually having to play evenly matched, on a level playing field, is too frightening for a gender that stakes it’s entire identity on making sure it wins every time.”

I agree with Dr. Kimmel to a certain extent. He should add, however, that it is the group of White men already in power that want to keep it that way. The poor, uneducated white men are just tools used to enforce the rage. The powers that be don’t want what they consider “poor white trash” at the table either.

All these poor people need to know is “they”, you know, the proverbial “they”, are taking YOUR jobs, raping YOUR women, destroying YOUR country, taking YOUR guns and the manufactured rage is off to the races!

Rage that is manufactured to keep the working class from realizing that it is destroying itself. It is working.