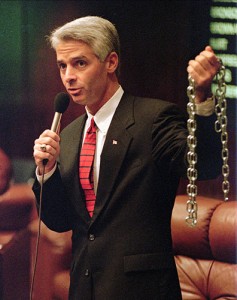 That is a familiar line out of both sides of Charlie Crist’s mouth, which he speaks out of ALL the time.  Will that be the line he throws at Democrats when he sells them out if he gets back into the governor’s mansion, by any means necessary?

By any means necessary being under the guise of a Democrat, this time.

Jim Greer, who you may not like, said it.  Leslie Wimes, who I can’t see how ANYONE couldn’t like if I do say so myself, said it. Now Adam Smith and Michael Kruse are saying it.

NO ONE KNOWS WHO CHARLIE CRIST REALLY IS!!!!

Today, the Tampa Bay Times did a wonderful piece on Chain Gang Charlie, detailing how he morphs into anything, says anything, will BE anything, to get what he wants.

Not only will he sign away rights to his child, he is instrumental in his wife not having anything to do with HER children.  It is fact that Charlie Crist authorized the adoption of a child he says isn’t his.  I don’t know where you guys come from, but where I come from, the only way you have the ability to say that a child can be adopted is if it is YOUR child.

This novella written by Adam Smith rehashes what is in Jim Greer’s book, and Charlie Crist called Greer a liar.  Is everyone lying except Charlie Crist?  I think not.

Reading the times’ article only reinforces my belief that Crist is a Sociopath.

The fact that he is using African-Americans to further his pathological need for power only sickens me more.

Just recently, Crist spoke of a big black man approaching him, and immediately decided that the encounter wasn’t going to end well.  Really?  Because the man was big and black means an encounter wouldn’t end well?

It’s that same  line of thinking that got Eric Garner killed by the NYPD!

One excerpt from the times piece goes like this:

For instance, Jim Towey, Chiles’ idealistic, outspoken head of social services and a former aide to Mother Teresa, lost his post because of Crist’s committee. Towey is now the president of Ave Maria University near Naples. He shakes his head that Crist is campaigning as a friend of black voters when he played such a key role in putting so many of them behind bars and in chain gangs. “He can change his image, but he can’t change the facts,” Towey said. “What I see Charlie Crist doing today is the same thing I saw him doing 20 years ago. He’s a master at media manipulation.”

Master manipulator not of just the media, but of people.  Charlie Crist will smile in your face, all the while sizing up the knife he is planning on sticking in your back.

Crist is telling everyone what they want to hear, but at the end of the day he will go back to his favorite line:

“I meant it when I said it at the time”

It reminds me of the lyrics from Send In The Clowns:

Don’t you love farce?
My fault I fear.
I thought that you’d want what I want.
Sorry, my dear.
But where are the clowns?
Quick, send in the clowns.
Don’t bother, they’re here.

Truly don’t bother!  The clowns are all here in Tallahassee on Bronough Street!