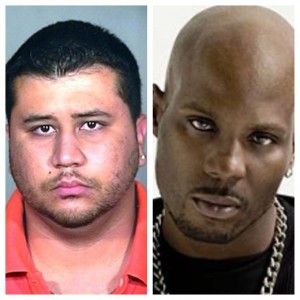 Update: So now it seems as though George Zimmerman will be fighting rapper DMX. SMDH! This is turning into a racial circus! In fact, it flies in the face of what happened to Trayvon Martin. What happened to Trayvon is REAL. This “fight” won’t be. All it will do is incite more anger because it will be staged and George Zimmerman will be the winner, “defeating” another black man. I am not sure what frame of mind DMX is in, given the fact that he is a drug addict, but someone, anyone, close to him should put a stop to these shenanigans.

DMX, if you read this, don’t participate in this piece of trash capitalizing off  of another black man!

Why won’t this man just go away?  After literally getting away with murder, this fool will not just fade away into oblivion!  He has this sick need to be in the limelight.  I’m sure some television network somewhere is working on a reality show about this guy!

George Zimmerman is going to box for charity, meaning he is trying to raise more money for himself. He is calling this latest circus “Celebrity Boxing”.  First and foremost, George Zimmerman is no celebrity.  What he is, is a murderer. He stalked and killed a young boy.  That does not make him a celebrity. It makes him a killer. Of course Zimmerman is reveling in the new 15 minutes he is getting regarding this boxing thing:

Zimmerman began boxing long before the February 2012 incident with 17-year-old Martin that drew national attention, he told Radar Online. The case polarized the nation around issues of racial justice, self defense and gun control.

Zimmerman’s plans to enter the ring come after he successfully capitalized on his celebrity in December by auctioning a flag painting on eBay, selling the artwork for just over $100,000 ( what fool bought this?).

Some of the proceeds from the event would go to an animal rescue charity (RIGHT!), Zimmerman told Radar Online, but he declined to name the organization. He also suggested he might not box again after the event.

“Obviously if I get my butt kicked around, then no!” he told the website.

Will anyone actually pay to see this buffoon?  Probably.  Octomom had her 15 minutes of fame turn into ratchetry at its finest. Why not this fool?

If a boxing match actually happens, it will be completely staged, because George Zimmerman couldn’t even handle a fight with 17-year old Trayvon Martin, he had to pul a gun and kill him, so I know he couldn’t box his way out of a wet paper bag against an actual adult.

Sit down and shut up George!