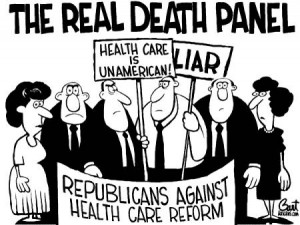 Florida, a state that ranks second in the nation for uninsured, has a major Republican Death Panel.  Rick Scott, Will Weatherford, and the rest of the Republicans that refuse to expand medicaid have sentenced people to die.  I did a story in March regarding one of those people sentenced to die: Charlene Dill.  Read that story here.

Rep. Alan Grayson(D) put Charlene’s story into the Congressional Record because he wanted to memorialize what the Florida Death Panel caused.  ThinkProgress.org did a story on it here.

Republicans are supposedly the Pro-Life party, right?  Then explain to me how they feel comfortable sentencing people to die. In explaining why he wanted Charlene Dill’s Story in the Congressional Record, Rep. Grayson said this:

Rep. Grayson (D) is absolutely correct.  For all eternity, it should be shown how the Republican party in Florida sentenced Floridians to die, because of partisan politics.

Charlene Dill Campbell will forever be immortalized in the Congressional Record, however the nameless, faceless, countless others who will die because medicaid will not be expanded will not.  That doesn’t change the fact, though, that they too, are victims of Republican Death Panels.

Now imagine how many lives will be lost, not only in Florida, but in other states where Republican Death Panels reign supreme.  When Sarah Palin referred to these Death Panels in this statement:

“The America I know and love is not one in which my parents or my baby with Down Syndrome will have to stand in front of Obama’s ‘death panel’ so his bureaucrats can decide, based on a subjective judgment of their ‘level of productivity in society,’ whether they are worthy of health care. Such a system is downright evil.

She was clearly referring to Republican Legislatures, because they are the only ones who have actually done what she described.  The Death Panels and bureaucrats don’t belong to President Obama, though.  They belong to the Party of No.

The sad part is that a majority of Floridians want medicaid expansion.  Read about that here.

Voters need to really express themselves in this election.