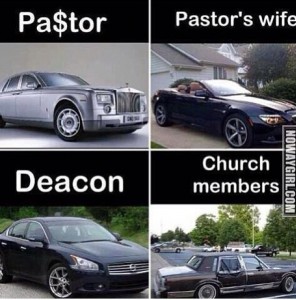 We all know that in addition to Africans being kidnapped and brought to the United States as slaves, there were Africans who sold other Africans into the slave trade.

While actual bodies are no longer being sold, apparently votes and political support are.  I was just informed that a select group of Florida African-American Religious leaders have had their palms greased by Charlie Crist to convince their congregations to vote for him.

It has come to my attention that as many as 50 Religious Leaders in the Florida African-American Community received pay-to-play money from the Crist Campaign, given the obvious problem Chain-Gang Charlie has with black voters.

Now by no means am I insinuating that pay-to-play doesn’t happen everywhere, but the Black Community is the LAST place that this needs to occur.  Instead of actually working to make the community better, people like Crist and those so-called “leaders” are again, taking our vote for granted.

This type of behavior is exactly what is keeping our communities in the worst conditions.  It is time that our people really investigate politicians for themselves.  It is time our communities look not to religious leaders for who to vote for, but do our own research and really look at who is just talking the talk, instead of walking the walk.  If you are barely making ends meet, barely driving a working car, barely putting food on your table, and yet your Religious leader is driving around in a Bentley and constantly asking you for money, there is a problem.

I wondered why Crist so matter of factly stated that he “will get the votes” when talking with Letitia Stein for her article on the problems he has with the African-American Community. He apparently feels like he has bought and paid for our votes, without actually doing anything for our communities.

I’m sure there are a great number of Pastors and Church Leaders who wouldn’t lower themselves to this type of dirty-dealing, but obviously there are those who WILL.

Decisions YOU make for YOU.