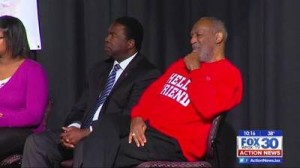 Mayor Alvin Brown of Jacksonville has said that he will return money raised by Comedian Bill Cosby for him at a New York Fundraiser back in September of 2014.

Bill Cosby has been in the news recently regarding allegations of rape, brought by several women.

For the record, I believe the women.  I believe Bill Cosby is guilty.

That, however, would have had to have been proven in a court of law.  It hasn’t, and due to the statute of limitations, it never will. Regardless of how I feel about the situation, doesn’t innocent until proven guilty still mean something legally?

The Court of Public Opinion is a harsh one,  I know, I contribute to that.

The Court of Public Opinion, however, does not mean a person is actually guilty.

You know what they say about opinions, we all have them, and this one, that Alvin Brown should return money raised at a fundraiser by Bill Cosby, STINKS!

Bill Cosby has done a lot of good over the years, especially for the Black Community.  He has donated millions upon millions of dollars to HBCUs.

In particular, Cosby and his wife Camille donated 20 million dollars to ensure that Black students could attend college at Historically Black Spelman College.

Should Spelman return that money?

Of course not, and I don’t hear anyone who is so outraged about the fundraiser calling for the return of the millions of dollars donated to various HBCUs by Cosby.

This was all a political stunt meant to hurt Alvin Brown by Lenny Curry supporters.

I might add the fact that some of those same people calling for Mayor Brown to return said money, never once said Charlie Crist should return money he got from Scott Rothstein, who went to jail, by the way!!

If it weren’t just a way to get an edge in an election, these same people would be calling for the return of the millions of dollars in charity that Bill Cosby has given to various organizations.

Where are those calls?

If Lenny Curry supporters say the money raised at that fundraiser should be returned, aren’t they also saying that money donated by Bill Cosby to help educate Black students should also be returned?

Of course they aren’t going to say that. It doesn’t meet their political purposes, besides:

1. The entire African-American Community would bring the hammer down on their butts so fast, they wouldn’t know what hit them.

2. This really isn’t about concern for rape and rape victims.  This is all a political stunt meant to harm a Black man using another Black man. We’ve seen this drill before.

Shame on them for using a situation that has plagued women for years:  rape, the subsequent public shaming,  and disbelief by law enforcement, for political gain.

While Lenny Curry supporters are pointing the finger at Alvin Brown, three fingers are pointing back at them for the shameful way they are trying to get an edge in this election.

I don’t know Alvin Brown or Lenny Curry, but I can certainly say using this terrible Bill Cosby situation for political gain is disgusting!

To my readers in Jacksonville:  Take note of the lengths that certain people will go to, to win an election.  Is that what you REALLY want?