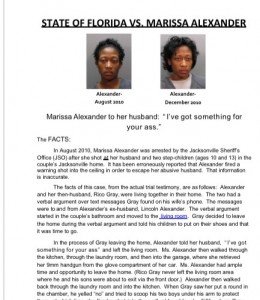 Everyone has heard the term “Angry Black Woman”. It is a stereotype that has plagued Black women for a very, very longtime.

Angela Corey, a seasoned prosecutor, sent legislators her version of the Marissa Alexander case via email, because state legislators were debating legislation that would grant immunity for those who fired a warning shot to deter would-be aggressors. She conveniently left out a few facts, as well.

Angela Corey is losing it, and losing it fast.  She is already pissed that the Appellate Court overturned the conviction.  Now she is pissed that Marissa Alexander may benefit from pending legislation, and she just can’t have that! Angela Corey, in her present position, is dangerous and a menace to society.  She needs to be removed. I’m not the only one who thinks so.  The National Organization for Women has called for Corey’s resignation. Read here.

According to First Coast News:

In the body of the email, an employee of the state attorney’s office says Corey wanted lawmakers from Northeast Florida to have information on the Marissa Alexander case should they be questioned about it. Lawmakers are considering a warning shot bill, inspired by Alexander’s case, that would expand the Stand Your Ground law to include people who fire warning shots.

Corey’s office says in the attachment to lawmakers that Alexander didn’t fire a warning shot, that she was firing at her husband and two step-children. Alexander will be retried on the assault charges this summer.

Angela Corey has made this case about her ego, and not about justice.  She is determined to take Marissa Alexander down at all costs, including possibly tainting juries and influencing legislation.

My question remains:  What does Angela Corey have against Marissa Alexander? I do have an additional question now: Why is Angela Corey still in office?